Radio is often a primary source of information before a crisis. But after the hurricanes that have battered the southern United States in the last month, the senate passed the Sandy Act, establishing radio as a first responder. Brave and creative broadcasters have managed to keep their stations on the air even as their facilities were being destroyed. And by doing so, these broadcasters have managed to keep their communities running. 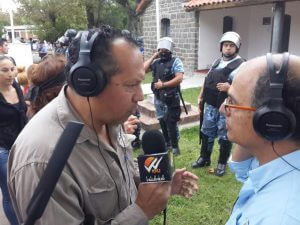 Radio Valle Viejo in Catamarca, Argentina uses ACCESS 2USB to report on a drowning from a low coverage area.

WWUS in the Florida Keys has remained on the air since Hurricane Irma. Using generator power at the studio and at the transmitter site, the station began broadcasting as soon as the storm ended. WWUS has served as a source valuable information about storm damage, as well as a comforting link to the outside world. The station has even helped people in the Keys obtain medical help. Because 911 isn’t working in the Keys, residents have broadcast their medical emergencies and gotten help from paramedics almost immediately. For communities in the Keys, radio is helping vital services stay functional.

Phone service in the island of Dominica crashed as Hurricane Maria swept through, virtually destroying all means of communication with the outside world. However, amateur ham radio operators were able to get online within hours, opening up lines of contact and remaining a valuable service ever since. The first reports of damage were delivered using ham radio, and it still is the most reliable method of communicating. In an interview with NPR, ham radio enthusiast Michelle Guenard said that in “these emergency situations […] ham radio is the only way to get information when everything else goes down.”

Radio stations in Puerto Rico have also shined in the aftermath of Hurricane Maria. WKAQ, a Univision station in San Juan, lost its roof to high winds during the hurricane. But the station stayed on the air. Ruben Sanchez, an announcer for the station, shared calls from listeners who reported damage. Sanchez also took calls from Florida, New York, and elsewhere, from family members and friends who sent well wishes to those on the island. In addition to calls, Sanchez monitored Twitter and shared text and WhatsApp messages to diversify the channels of communication. All without a roof!

While Texas and Florida are recovering in the wakes of Harvey and Irma, Puerto Rico is still struggling. The infrastructure supporting radio stations in Puerto Rico is decimated in the wake of Hurricane Maria, and the entire island will be without power for the next 6 months (at a minimum). While some stations are staying on the air with the help of generators, broadcasters still need help to continue delivering disaster relief.

If you’d like to donate to relief efforts in Puerto Rico, visit www.mariafund.org – 100% of all donations go directly to recovery.

SBE and NAB are also calling for direct help from members for the broadcasters of Puerto Rico. For more information, click here.