Comrex will be closed on Monday, October 10th for a federal holiday. Please note tech support will not be available. We encourage customers to contact us ASAP for assistance. We will reopen on Tuesday, Oct. 11th at 9AM Eastern Time (US). 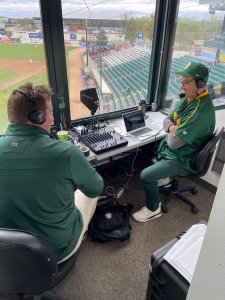 “I’m an engineer for 22 stations across southeast North Dakota, and I handle everything from the computers in the studio to the transmitters and everything in between,” said Jake Bechtold, Assistant Engineer/IT Manager for Radio FM Media. “It’s a lot of running around between all the different markets.”

Radio FM Media stations incorporate a wide variety of remote programming, ranging from promotional remotes to live sports coverage (including coverage for North Dakota State University football). They’ve been using Comrex ACCESS products for over 13 years, and recently, some of the stations they support have upgraded to ACCESS NX, a portable IP audio codec designed for remote broadcasting.

ACCESS NX has given the stations Radio FM Media supports much greater flexibility. “There’s a large country music festival near us, and we always want to do a live morning show from the site,” said Bechtold. “Now, when we’re planning that broadcast, it’s no big deal – we just bring the ACCESS NX and hook it up. There are so many different things we can do with it.”

Bechtold uses a range of different networks with ACCESS NX, including Verizon MiFi hotspots, hardwired internet connections, and school WiFi networks. The versatility of ACCESS NX’s network options makes it possible to adapt networking strategies quickly, depending on what each location offers.

As a long-time user of Comrex ACCESS, Bechtold noticed pronounced improvements in the newer ACCESS NX units. “Setting up the WiFi on the NX is a million times easier than on the Classic. On the NX it’s super simple,” he said. “I also think the add-on mixer is greatly improved, and the second headset input makes a huge difference. It’s made an already good product even better.”

“The biggest thing for me with the ACCESS is it just works,” said Bechtold. “You plug it in, and you hit connect, and you’re there. I can’t imagine trying to do a remote without one.”