In light of the horrible tragedy in the Philippines, many broadcasters from around the globe converged on the island nation to report on rescue and recovery efforts. 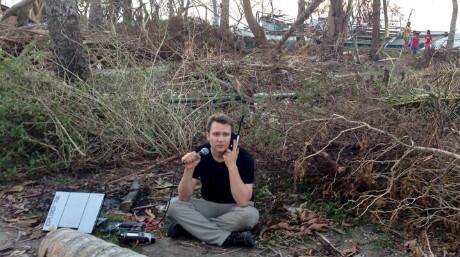 This story from the CBC first appeared on Twitter and a very nice how-to was subsequently posted on a CBC blog:

Ever pack too much for a trip? Well, the prospect of your overweight plane crashing into the ocean certainly helps prioritize what’s important.

But let’s begin at the start where it always does. My phone rang. Go to the Philippines. Though I’m now a host, my foreign correspondent instincts kicked in — and the greatest push is speed. I was on a flight hours later. One that would take me the long way around to Asia, via the Atlantic and Middle East. It’s a crazy routing but actually got me “in country” earlier based on existing flight schedules.

Within two hours of landing, I was hosting World Report live from a street corner in Manila. The Wi-Fi in my hotel had decent upload speeds so I knew I could use my iPhone. It has an app called Bria, which connects to a piece of hardware called a Comrex back in the World Report studio. The trick was finding the magic spot — a place outdoors where it ‘sounds’ like you’re in the Philippines, while still being close enough to the hotel to tap into their Wi-Fi. (You can do this on 3G too, but roaming costs are expensive and the audio quality would be lessened).

Once in the disaster zone, there was no Wi-Fi or cell signal, so there had to be an alternative approach. There are a number of options but I had eliminated some of them by dumping gear. Along with colleagues Susan Ormiston, Kas Roussy and Jon Castell, we chartered a small plane. So small, it couldn’t fit all our gear. So, on the tarmac of the Cebu airport, we got rid of gear, clothes, cases, water — anything to get the flight off the ground. We did — but just barely. The plane couldn’t get past 2500 feet. It meant flying around — not over — mountains.

The key piece of equipment I kept was the BGan, which looks like a small briefcase but folds out into a satellite dish and creates a data link. Basically, it makes internet in place that it doesn’t exist. But it’s not cheap to use. And it’s not fast, more like dial-up. To the BGan, I attached a portable Comrex unit. Looks a bit like a tricorder from Star Trek. It takes voice from a microphone and turns it into data. Many people in Canada will be familiar with them as the device we use to go live into programs. However, when using a BGan, there is a significant delay. Remember, the signal gets processed in the Comrex, up in to space, back down to a ground station in the Netherlands, then across fibre optic cables laid on the bottom of the Atlantic and eventually into the regular internet stream into Canada. We had the choice of going live and accepting the delay on air, or pre-taping a few minutes before showtime, and having our ap/tech in the Toronto studio tighten up my responses to questions to eliminate the delay.

Then there all the video rants I did, and photos I took. They were all recorded/taken on my phone and sent directly from it – either by cell signal or by attaching to the Wi-Fi generated off the BGan.

Yes, I did this on my own. Many of our local reporters do the same — just without the BGan. One big concern is power. All the equipment runs on rechargeable batteries. It means charging all your equipment any time you’re near a generator or a car (using an inverter to get power). I also have a solar charger for my phones.

After doing these types of deployments, you get pretty efficient. Total time to pack: 25 minutes.