Click to read the following changes in operation due to COVID-19.

Doing “The Ask”  – the request for donations – is the most important part of over-the-air fundraising, but it’s also the most difficult. It’s a skill that few can do well. But my friend, David, who works in the Portland OR area, has unquestionably mastered it.  He is so good at “The Ask” that for several years, he’s flown around the country doing over-the-air fundraisers. But flying around the country was taking a large toll on David – he was away from his family and wanted to spend more time at home. 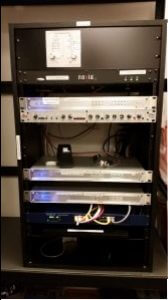 He needed a solution, so I set him up with 2 Comrex ACCESS units. One was installed in his studio, and the other was a “mobile unit” that could be shipped to any radio station that David was working with. Whatever station he was working with would install the Comrex ACCESS and connect to David at his studio. He was a much happier guy and spent a lot more time at home using the ACCESS setup.

The mobile ACCESS was configured to feed the station console, and fed with a backfeed mix-minus audio from the station console.  I connected up a toggle switch on the mobile Comrex unit, connected to a GPI input on the ACCESS which signals the unit to ‘Call Home’ and connect to David’s studio through the station’s firewall.  Some stations have less-than-stellar internet bandwidth, especially during morning drive when many internet users are arriving at work and checking email.  With the ACCESS web-interface, David and I are able to monitor the quality of the connection, and we’ve watched the quality of the link drop to fewer and fewer kbps throughput. But the audio quality from the ACCESS is never compromised, even when the link is less than stellar. When bandwidth is very low, the ACCESS will increase buffer while maintaining the audio transparency. Even though increasing the buffer can increase latency, the listener rarely hears a problem.  We use 92/kbps AAC Plus-LD mono for the best quality and lowest latency.  Ultimately, the set-up worked so well that we purchased a third Comrex ACCESS so that two units are available to ship out to multiple stations doing fundraisers one after the other.

Bryan Hubert served as the Chief Engineer at KCMS Spirit 105.3 FM for 26 years. He is now an independent engineer.