I began my broadcasting career 31 years ago, working in local radio. My career took a detour into television when I became the main news anchor at the local NBC affiliate in Saginaw, Michigan – I stopped doing radio for a while and did television news anchoring for about 13 years.

But radio is my first love, and I especially love talk radio. So I found a way to get back into it – first in Albany, New York and then on a morning show in San Antonio, Texas at 1200 WOAI. I took a big pay cut, but I did it because I love radio. I’ve been there for 15 years now, and in that time, I’ve been able to shape the show into something that felt right for me. We shifted to an afternoon spot, and shifted more toward talk radio, and we started syndicating. The Joe Pags Show is now syndicated on 130 stations. 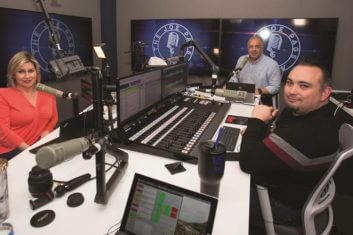 People love our show because we don’t fit into a traditional talkshow mold. I’m in this industry because I’m an entertainer, and so we focus on that first and foremost – we integrate music and other segments in addition to news topics, and maintain a light-hearted tone. We offer a morning show feel in the afternoon, and that appeals to people in demographics that aren’t typically consumers of talk radio.

In the last several years, I’ve only set foot in the WOAI facility a handful of times. Ten years ago, I was diagnosed with cancer, and I wanted to get back to work as quickly as possible, so I began building out my home studio then. Now, I’ve been doing the show primarily from my home studio for nine years. (And I can do this because of Comrex BRIC-Link – so much of my career has depended on me being able to quickly connect to affiliate stations, and BRIC-Link has made this possible.)

I’ve always believed that it was possible to be a broadcaster, in the truest sense of the term. I’ve never been a TV guy or a radio guy or an internet guy – I’m a guy who wants to broadly cast what I do. I think that all of broadcasting can be utilized in one show, and given that belief (and my experience in television), I’ve always wanted to incorporate a visual element into our show. I want people to have the option to listen to The Joe Pags Show live, and also as a podcast, and also to make it possible for them to watch it as a live video stream. Letting people see the inner workings of the radio station while I’m doing the show is pretty cool.

Several years ago, I purchased a Comrex LiveShot to do live video broadcasts with NewsMax TV. It worked very well for us – we experienced very little delay, and found the video quality to be amazing. It was easy to set up. Granted, I am a technical person, so I more or less know what I’m doing, but I think LiveShot would be easy for someone with less experience too.  There’s an input, and an output, and once it’s connected, that’s it – you’re ready to go. Plus, the LiveShot Control App made it easy for me to monitor connections from my smartphone, so I could make adjustments if needed without too much fuss.

LiveShot Portable and Rack for TV and visual radio

We did a show from the studio with Ted Cruz as a guest, and I found it to be startlingly easy to use. We were live on the radio, and also connected with live video to NewsMax TV. I hooked up two cameras – one for me, and one for the two-shot. The broadcast went off without a hitch.

I think it’s vital that we, as radio broadcasters, don’t lock ourselves into one format, because we’ll be left behind by technology if we do. We have to be thinking about how to play to a new, younger audience – a more diverse audience than we traditionally expect to have. How do you keep them connected? 15 year-old kids spend much of their time on TikTok, and on Snapchat, which is all video based stuff. There’s constant visual stimulus, and I think we’d be remiss if we didn’t provide that also.

I appreciate that Comrex technology has given me the flexibility to work from home and explore more of these avenues.

This piece was originally published in Radio World.

The author is the host of The Joe Pags Show.