BY BOB SMITH
SOUTH HADLEY, MASS.—South Hadley Community Television provides the town’s PEG content on local Comcast cable channels. The studio facilitates the production and broadcasting of programming for local residents, focusing primarily on the coverage of municipal meetings. Because we have an older infrastructure, we have no direct control over the switching of our signal when we go to live locations. The switching occurs at Comcast’s headend a couple towns over. This has really limited us.

We wanted to start streaming, but because the live stream never passes through my headend—which houses our Tightrope playback system—we couldn’t do so. I wanted a solution that would let us do away with a modulator, put the live signal back in our hands and produce live programming on our own.

That was when I came across Comrex. I was attracted to the company’s history—Comrex hasn’t been in video very long, but has been building equipment for radio since 1965.

I was impressed by how easy it was to get a demo unit. I was able to test LiveShot for two weeks through Comrex’s loaner program. I had the chance to use it for a town meeting during the trial and found that it was very easy to set up. Comrex support was very solid and helped me solve the problem. 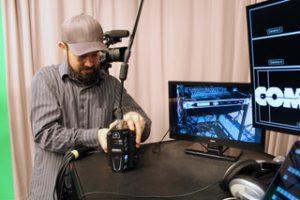 Right now, we primarily use LiveShot to originate programming from our town hall. The only available connection is public Wi-Fi—everyone in the meeting is usually using it—and we’re often cramped for bandwidth. But even when you have 120 people using cellphones, LiveShot is able to push out decent video.

Being in western Massachusetts, our cell signals are erratic and spotty. LiveShot’s ability to handle cellular networks was another factor that appealed to us. I consulted with Comrex to determine how we can negotiate coverage and data plans with providers, so when we begin broadcasting over data networks more regularly, I feel confident that we’ll be supported.

LiveShot has opened our channel up to 24/7 streaming. Our signal now goes through our own system; I have control over it. I can switch out to it when I want to and can feed it into my streamer. Now, I can truly go live with anything.

Even though our users don’t have an engineering background, it’s still easy to understand how LiveShot works. It’s empowering to think, “Hey, this is a solution that bigger stations use, but it’s still accessible to people on a local level.”

This story was originally published in TV Technology. To read the original story, click here.

The author is the studio manager for South Hadley Community Television.