This December, WDAZ, an ABC-affiliated television station serving Grand Forks, N.D., decided to do something a little different with the evening news broadcast. To celebrate the opening of Santa’s Village, a holiday display in Grand Forks, WDAZ’s anchors were set up in the village, and news director Jeff Nelson coordinated a live remote broadcast of the entire 30-minute newscast with Comrex LiveShot. 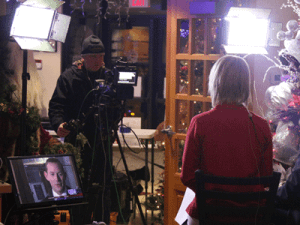 Each of the shoot’s two cameras was equipped with a LiveShot portable unit; the units were individually connected to two LiveShot rack units at the studio. This two-unit enabled the studio operator to switch between feeds easily.

Over one connection and with no additional equipment, WDAZ was able to send video from the field and receive necessary return feeds from the station with LiveShot’s return video function. For the duration of the broadcast, WDAZ was able to stream prompter to a display at the primary location. The second location used the return function to watch the switched program output from the station in real time.

Thanks to LiveShot’s CrossLock Technology, which intelligently monitors network performance and quarantines underperforming modems and networks to keep from lagging the connection, WDAZ was able to trust their connection to deliver the video they needed without much maintenance.

Broadcasting from the heart of the community is as local as it gets, and the utility and flexibility of LiveShot made it easy for WDAZ to plan innovative remote programming with lower risk.

This story was originally published on Creative Planet Network. To see the original, click here.

Click here to learn how LiveShot can bring your local broadcast to the next level.